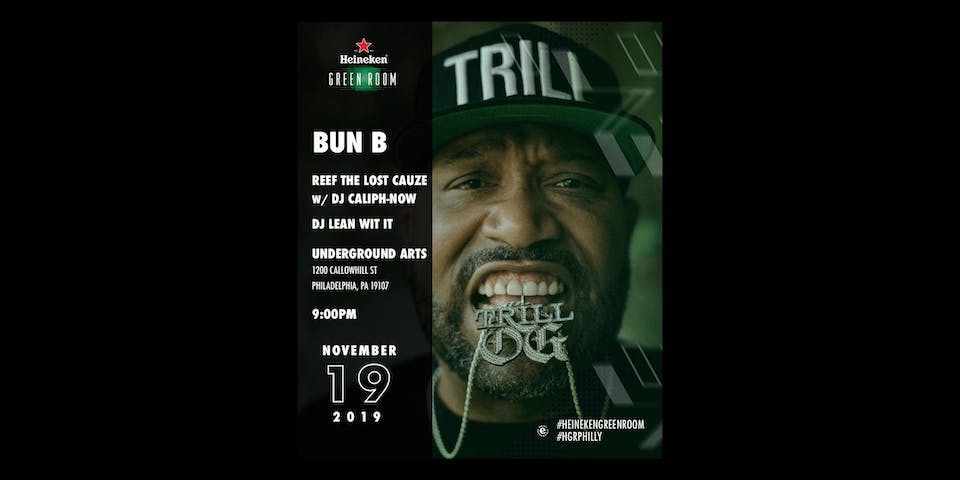 Bun B is an American rapper from Texas. From 1987 until 2002, he was one half of the southern rap duo UGK (UnderGround Kingz), a group he formed alongside rapper Pimp C. Their song "Pocket Full of Stones" became the first UGK song to get major airplay throughout the United States. Their third album, Ridin' Dirty, peaked at number 2 on the R&B Charts in 1996, and at number 15 on the Billboard 200.

In addition to his work with UGK, Bun B has released five studio albums, including 2010's Trill OG, which received a “5 Mic” rating from The Source. Beginning in 2002, Bun B made guest appearances on numerous albums by other rappers and released a 2005 mixtape titled Legends. Singles featuring Bun B guest appearances included "They Don't Know" by Paul Wall, "Gimme That" by Webbie and "I'm A G" by Yung Joc. In October 2005, Bun B's debut solo album, Trill, was released. The album peaked at the number 6 spot on the American Billboard 200 chart and #1 on the Top R&B/Hip Hop Albums chart. His song, “You’re Everything” featuring Rick Ross has passed 21 million views on YouTube.

In 2011 Bun B joined the faculty of Rice University in Houston as a Distinguished Lecturer, where he teaches a course in the School of the Humanities on Hip-Hop and Religion. On June 24, 2014, Bun B was awarded the 360 Legend Award for his successful music career and his impact on the local community at the “Htown Beatdown” concert hosted by local radio station Hot 95.7.

Bun B was featured on Houston underground artist Killa Kyleon’s new collaboration, “Doja Sweet,” also featuring A$AP Rocky. The single samples one of Three 6 Mafia’s most well-known songs, “Sippin' On Some Syrup.” Bun B is featured on the album alongside well known artists like A$AP Ferg and Young Dolph. Bun B’s commercial success as early as the 1980s as half of UGK, his work as a solo artist beginning in 2002, and his resurgence as a collaborative artist and academic ambassador for the hiphop industry make him compelling to a wide audience of both longtime fans and newer, younger listeners.