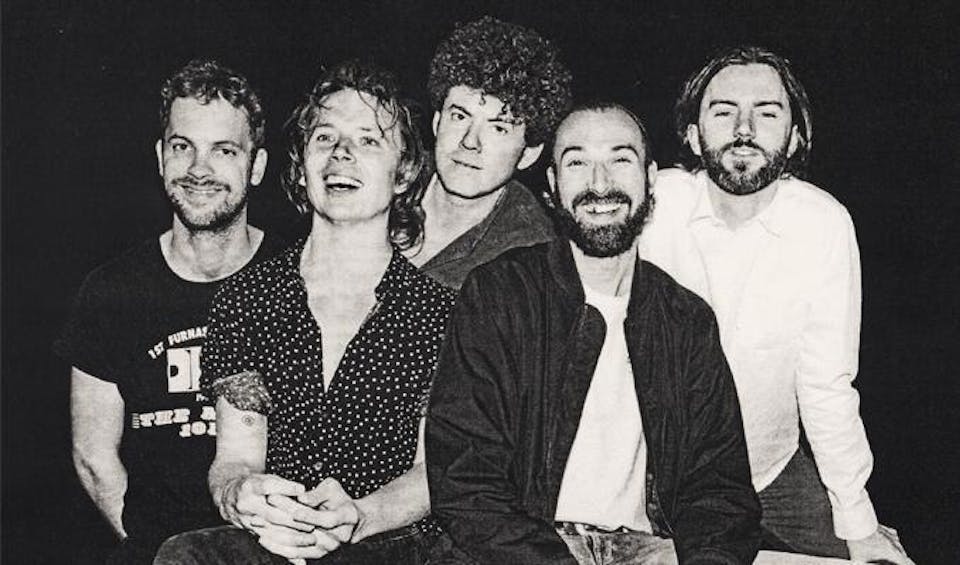 What do you call a group of psychedelic songsters all grown up? A group who were often considered the younger sibling, who have come into their own? Artists who just released their best piece of work yet, and musicians who unleashed one of the rowdiest and strongest live touring sets 2014 witnessed? You call them POND.

2014 unveiled the full-formed POND and the Northern Hemisphere barely survived. POND supported the Arctic Monkeys throughout Australia and then jumped on the next plane to Europe. There, POND stunned audiences at Primavera Spain + Portugal, UK festival Field Day, and brought the house down, every night, across their UK/EU headlining tour. Touring with Nick Allbrook (Vocals / Guitar / Astronaut), Jay Watson (Drums / Vocals / Dad Jokes), Joseph Ryan (Guitar / Bass / Vocals / Actual spaceman), Jamie Terry (Keys / Good vibes) and with barely a breather between, POND tore through North America, with sell-out shows ranging from one coast to the next, bouncing between countries like a pogo-stick. Pond's 6th album "Man, It Feels Like Space Again" hit the shelves January 23 (AUS) / January 26 (UK/EU) / January 27 (US) 2015, with more festivals and headline tours booked around the globe to showcase the new tunes and support this stellar album release.

"Man It Feels Like Space Again" was recorded in Melbourne Australia and once again mixed by buddy Kevin Parker. The band showcased "MIFLSA" songs throughout their first headline tour of the US in October. Starting at a festival in Mexico, heading to New England, traipsing through Canada, and back down the west coast, POND pondered, why stop there? After their sold-out Los Angeles Halloween show, POND ventured south to play music festivals in South America, where audiences exploded upon hearing "MIFLSA"'s hits and partied-hard with the melodious entertainers.

Since the beginning, POND wrote music and produced records faster than a label could release them. POND followed up "Psychedelic Mango" within months, releasing "Corridors of Blissterday," a frenzied effort recorded live with an eight-piece band in 2009. A year later, their third album "Frond," a kaleidoscopic classic, dripping with funk and falsetto, loosely inspired by a diet consisting only of Prince and Fleetwood Mac, delighted audiences Australia-wide. "Frond"'s release finally realised industry attention and praise, solidifying the band and their music in its own right. "Beard, Wives and Denim," their 4th album, was recorded on a farm a few hours South-West of Perth. "Beard, Wives, Denim" is a triumph of the eclecticism and good humor that drives POND.

Upon "Beard, Wives, Denim" release in March 2012, global attention shined its light upon the Perth gang. A North American tour ensued, smashing through 31 shows -- including 8 at South by South West -- where they were one of the most talked about bands of the festival. From there, they returned home to Australia and sold out a national tour before storming UK and Europe, causing NME to tout them as the "hottest band in the world right now" as well as proclaiming "Beard, Wives, Denim" as "quite possibly the best album released so far this year."

In August 2013, POND gifted to the world their 5th LP in as many years, "Hobo Rocket." "Hobo Rocket" is 40 minutes of perfectly imperfect emotion, challenging veteran listeners and music reviewers with an evolved and vigorous sound. Singer Nick Allbrook describes the release as the "...kind of mindset of finding our own little place in music, and being more of a functioning band, which is what makes it noisier and denser. This one we went as brutally hard as we would at a show. We wanted the songs to sound loose and live."

Enthusiasts and music aficionados world-wide agree MIFLSA is POND's most focused composition to date. This mirrors their touring efforts, dynamic and enthralling live show, media buzz and essentially, the maturation of a musical career a long time in the making. Maybe it's not such a bad thing growing up, especially when it's this much fun!