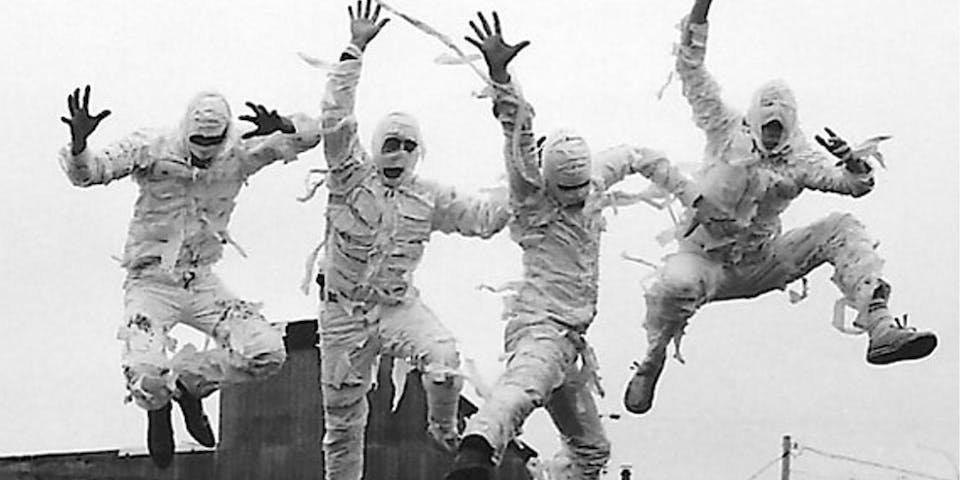 The Mummies gave the world "Budget Rock" and the world has never forgiven them. This Bay Area quartet continues to astonish audiences, almost 25 years after their inception.

The band was influential in the early 90's D.I.Y. scene, beginning their recording career with their own Pre-B.S. recordings. Future recordings appeared on such legendary garage labels as Estrus, Telstar and Sympathy For The Record Industry, the latter of whom released their indelible single, "(You Must Fight To Live) On The Planet Of The Apes". Despite evidence to the contrary, The Mummies honed their craft well. As bassist Maz Kattuah once remarked, "We spend as much time making our records sound bad as other bands spend making them sound good."

The Mummies minimal but ferocious sound has met with acclaim from the likes of Billy Childish to Jack White. Ty Segall covered The Mummies classic "Stronger Than Dirt" in his University of San Francisco dorm with his band The Traditional Fools. Often imitated, their sound has never been duplicated.

The band dis-banded in the 90's but popular demand has led them to wrap themselves in gauze yet again and play festivals throughout the world. Recently they have headlined such bacchanals as The Burger Boogaloo and The Funtastic Dracula Carnival. Their stage performances are still the wildest you will ever see.